My name is Dragriffin and welcome to today’s topic:

It’s been more then a week since I left my hometown, Montreal. I know, it’s been a short while, but it has nothing to do with the fact I left my hometown, it’s related to the next step. Can you imagine if I was already “Oh I want to go home!!!”?. Shortest travel blog in history! So yes, I’m still in Canada until tomorrow. I was and still am working until I leave tomorrow. So, what about fear and doubt? Am I stressed about leaving tomorrow? Of course, I am. Leaving for a long time, on a new continent from which I know very little and know nothing of the language. So yes, despite de fact that I’m going on this adventure, I have my own fears and doubts about doing this. And it’s okay. Or at least, I feel okay with it.

I feel excitement too for leaving like this. Excitement also for leaving lighthearted and that I said all things I wanted to say. I made my peace before I left because I don’t want to carry all the baggage and fears and stress while I’m exploring the world. I want to be fully immersed in this new adventure and enjoy it all. I want to take it all in and make it part of my life and who I am. So what about fear and doubt then?

I’m only mentioning this because in some occasions, people have been telling me that it takes courage. That’s besides the other ones saying, “You lucky bastard!”. And I was surprised. Not by the “lucky bastard”! But, why courage? “Well, you are leaving for a while, so many things can happen, you will be alone and won’t even speak the language. So how will you manage?” Besides travel insurance to back me up. Seriously kids, if you don’t have one and you want to go on adventure like Link in Zelda, get travel insurance. 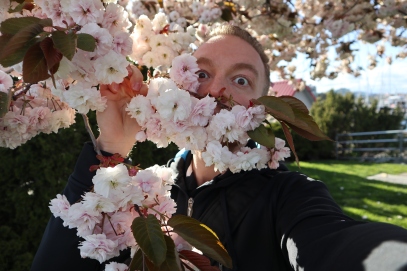 That way, when Epona, the horsey, tramples you because you keep whipping that poor horse like if it was a race car, travel insurance might bring you back home without loosing all your rupees. I really hope you guys get the reference.

Anyway, it surprised me because the industry I work in has so many travelers that are doing the same. Leaving for long periods of times, putting everything behind for in exchange of adventures. I find that so many other people are more deserving of the word “courage” then me, because there are things so much more fearful then going on a trip overseas for two months. I respect those that take up their biggest life challenge, like loosing weight or going back to school when you are over forty or even fifty. I respect those that must make the hard decisions like putting an end to a relationship, good or bad. I respect those that speak up their minds in a class full of sceptics and those that dare stand up to all the racism, sexism or homophobia we still live everyday, to try to put an end to those injustices. I respect those that make the grand romantic gesture of going halfway across the globe for the sake of the one they love or to find the one they love. Yes, I’m a romantic. Disgusting, I know. Live it it! It takes courage in so many other fields besides traveling and going on an adventure. I respect those that go talk to that “oh so very famous business person” to get their foot in the door. There are very little people who dare do those things. Or the courage to quit a job that makes them miserable. I’m not saying some are worth more than others. I’m just saying that in face of doubt and fear, everyone deserves to be told they have courage for making the hard decision and that more often then not, we don’t let them know. They feel alone in it and that’s just not cool. How about you try sometime this week to go up to someone that had to make a hard decision in their life, no matter how small and let them know that you admire and congratulate their courage in face of so much pressure, doubt and fear they must have faced before doing it. I’m serious. Do it. Who knows, it might even be telling it to yourself when looking in the mirror.

I have an amazing friend of mine that moved a while back. He was a big guy with one hell of a big heart. But little luck. One day, he left it all behind. He met someone and went all in. He moved away from friends and family to start it over with a girl he loved and kids he had never met. It wasn’t his kids, but he just went for it and that big guy is not so big anymore. His heart is bigger then ever and I admire this fellow of mine and everything he did until know. I’m sure he’s also an amazing father. Cheers to you Frank for the amazing person you’ve become. It took courage to take that big step and I admire you for it. You should be proud of it and you have the right to wake up in the morning high and mighty.

As for me, although I do feel doubt and fear for my upcoming trip, it wasn’t a hard decision. I don’t feel courage was involved. It was an opportunity. The only fear I really had was not actually taking it and regretting it. Now that was scary far beyond leaving. So here I am, my last article before moving to another continent. And you know what my biggest thought as I’m writing this? “I can’t wait to taste food over there!” That’s my big thought! If your gut feeling is telling you it’s the right thing to do, beyond doubt and fear, do it. There will always be great food once you make that big step.