My name is Dragriffin and welcome to today’s topic :

I’ve been quiet for the last two weeks, ever since my birthday to be precise. Why you might ask? Well, I was going through a profound personal reflection. Before I get to the juicy part, let me tell you about my birthday. (May 28th for the curious ones! Send me gifts and cheers next year!).

First off, before I celebrate this glorious birthday, I had to think about one very important thing. “where will I celebrate it this year?”. Last year, I was back home in Montreal, with friends, family and a beautiful girlfriend. Given that this year, I’m in China, away from all of that and single, I had to decide how I wanted to celebrate. So I went with the logical one. On top of a mountain. Not any mountain! On top of Mount Huashan, which has the reputation of one of the most dangerous hikes because of some planks and chains to get up there. In other words, quite exciting! So I decided that I wanted to be there either by sunset (on top) or sunrise (still on top). Now here’s a little problem I faced before even getting at the mountain. Long break for the people of China in celebration of the Dragon Boat festival… Tickets for train, airplane and all were fully booked. Or almost fully booked. Last option was a nice 14-hour train ride to get to destination on the comfortable hard seats. If you saw my video on Datong, I mentioned something about these hard seats being very close if not worse than church benches… But I’m profoundly stubborn. Sometimes too much for my own health. So I decided to go for it anyway. After a dreadfully long trip, I arrived at 15h. On my way to the hostel, I made two new friends (who made the same mistake as I did. Jiaze Sun and Humboa). My two eager younger friends wanted to also climb the mountain to see the sunset. Why younger? Well Jiaze Sun and Humboa are 18 years old.

Eager because they thought that climbing the mountain to catch the sunset will take about 2 hours… And they called me old uncle when they learned my age. Humboa is slightly out of shape (as you might notice) and Jiaze Sun wants to join the army next year.

Obviously, this “Old Uncle” here had some pride. So there was no way in actual hell that I would be behind Humboa and Sun was a good competition.

“So what’s the mountain like?” Well, 1450m of denivelation spread on a very small 9km trail. Also, it’s a touristy mountain. With the long vacation, a lot of people showed up. Because it’s know vacation, I got hit by my first deception. The mountain doesn’t have that much “danger” to it. Just a million stairs or if you’re lazy, a comfy cable car which still requires either a bus or a 4km walk to get too. Obviously, me and my new friends didn’t define ourselves as lazy. Or at least, Sun didn’t. I could see the slow desperation filling Humboa’s eyes when he saw the many… many, MANY stairs and never ending uphill to get to our destination.

Before you knew it, Sun and I left Humbou behind (we will never forget you brother! *Snif*) and went full on climbing mode. Uneven stairs, very dangerous climbs that are not considered as stairs any more, some chains along the way and old people greeting you when they are coming down from the top while singing (What the f…How did they…never mind!). 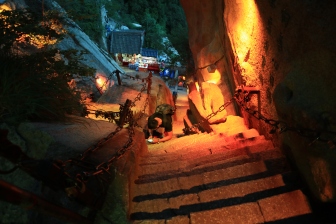 All in all, it took us about 6 hours of none stop climbing some people take two days). So we missed the sunset. But we decided to spend the night on the mountain, again, with many other people. For a second, I thought half of China had the same bright idea. Some people had their tents. There’s also a hostel at the top (fully booked) and then, you get to REALLY live the full Chinese soviet experience. Green military long coats. The day was hot, but the night was freakishly windy. So no really choice here. I really felt like that Russian soldier in Siberia like in Golden Eye. Frozen and thinking about warming myself with a smoke.

Heck, I don’t smoke, by right then, anything warm would have been welcomed. Remember I said I was stubborn up to it being unhealthy? I can tell you I didn’t die of cold that night, or else, a ghost is writing this. It was quite an experience and when the sunrise was starting, I forgot about the cold. Oh yeah, Humboa managed to get at the top as well (at 2 in the morning. Brave little guy!)

During my long night, I thought about a lot of stuff. My life, the last year, my decisions, the good, the bad. It was my birthday and here I was, alone on the top of a mountain. Well, not so alone with all the strangers, but you get the drift. I wanted to be there because I wanted to enjoy something purely for myself. To do something for no one else but me. Sounds self centered, right? Maybe.

But sometimes, you need to get a good long look at yourself, at what you can accomplish and what awaits for you once you reach that top. In my case, after the painful 14-hour train ride, 6 hours of non stop 1450m climb and a long cold night, I got myself a sunrise for my birthday. And I asked myself, what’s next? Last year, I decided to loose wait, and I did. So this year, I decided to plunge myself into nothingness, into uncertainty, into adventure and live it like I never did before. See where it gets me. So I decided to leave my life back in Montreal, my job, my friends and family and try something a bit different, a bit out of the norm, but mainly, something to help me grow and forever put in the past the worst parts of myself.

So there I was, with Sun, Humboa and a girl that decided that she wanted a picture of me too. 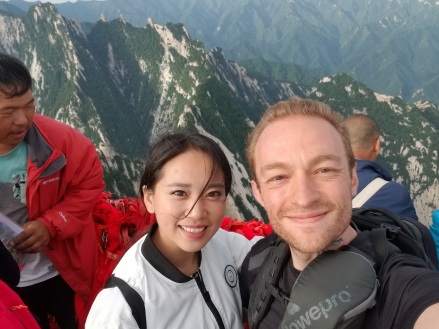 We watched the sunrise. Humboa decided that he wants to get in shape. Sun is not so sure about the army given how hard this climb was. I decided to start from scratch. Build myself up. We drank some beers and said cheers to the world (and my birthday). It was quite a sight. And I decided that I wanted to call out to the world. So I did. I screamed!

Until I was out of breath. Before I knew it, on the hundreds of people there, 10-15 people decided to do the same! So Humboa, Sun, this new girl (Sunny she said her name was) and I joined in. We all went out with a :

And we laughed. It’s a Buddhist mountain with temples. Maybe someone/something heard us. I doubt it. But it felt good. It’s all that really matters.

On the way back, the kids were sleeping. The old uncle was quite alright with energy to spare. HA!