As part of the life of a real expat, you sometimes need to look for a new apartment. It’s a bit my situation. I currently do live in an apartment, but as you might know, I share it with roommates and cockroaches (Or Tommys as one of my roommates so affectionately calls them). Am I moving because of the cockroaches? No. Having your everyday friendly Tommy saying, “Good morning!” and “Have a nice day!” is the closest thing to a girlfriend I can have now. I don’t mind them all that much.

I just wished they also did the dishes or moped the floor… But Tommy only likes to eat and have sex. Almost like a cat, but without the cuteness. Hence the cat picture instead of a close up of Tommy.

Why am I moving if I’m in such a close relationship with Tommy? Well, the landlady is selling the place. I doubt she will sell it anytime soon given that most of the people visiting the apartment tend to try running as soon as they open the door. (It’s a hell hole…). I will not talk about the permanent pool we have in the bathroom and the little black worms playing “Marco Polo” in it. I won’t talk about it!  Regardless of all that, she’s still trying to sell the place for the whooping total of 7 million. RMB. You heard me right kids. 7 million… That’s two million $CAN. You should see the potential beyond the layer of horror! That sh*thole is still $CAN 2 M… 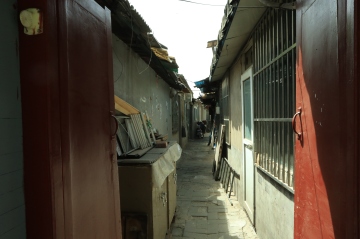 “Good luck!” I would say. But instead of gambling on it, I decided to start looking for a new place. At least, to prevent the worse and who knows how long my relationship with Tommy will work out?

So how does the hunt for an apartment work here? Well, you can use thebeijinger.com website, the foreigner “go to” for everything from work to finding an apartment. Or you can use the many groups on WeChat that publish new apartments. There are a lot of places. Where’s the problem? Well, you need to try to find an apartment without agent fees. Agent fees?! Yes, I said the same thing. You have all these agency that manage apartments / rooms. The agent fee is usually the price of a month. Then, you have to pay a deposit (usually a whole month) and then, a lot of places want you to pay every 3 months. If you’ve passed your elementary math class, that’s 5 months worth of rent you have to pay the day you move in. Insane!

Completely mad! Some pay it. But a lot are looking for those apartments rented directly by the owners and where you only pay the deposit and, with some luck, monthly rent.

Isn’t rent cheap in Beijing? Nope! That’s where everyone can get f*cked quite well. Rent for a room goes anywhere between 2000rmb (that’s $CAN400) up to 5000RMB (that’s $CAN1000) for a room. A ROOM! Then, for a whole apartment like I used to have back in Montreal, in another life, it can go up to 15000RMB a month. That’s sick! But given that Beijing is the city with the highest salaries in the country, it’s also an opportunity for those that own a place to make money and pay for their own place. Everything else can be very cheap. Transport, food, restaurants, bars. But apartments are like a battlefield. Therefore, it’s in that context that I must think about finding a new place. Time to put my helmet on and go to war! “I WANT ONE THAT’S TOMMY FREE!!!” 4k… damn… maybe I’ll settle with some Tommy’s after all.