First off, just writing this article makes me laugh when you compare it to the last one. Which one? Obviously someone didn’t read it. So go back an read it to get the joke!

Last week was a national holiday in China. The mid-autumn festival which also has the moon festival in it. I basically went from “mental” busy, to holy sh*t, everyone’s gone. No contracts, nothing. China was in vacation. Therefore, I ended up in a forced vacation. Go out and travel you m*ron! Smart plan, right? No! You see, back in May, I learned a very precious lesson about holidays in China. “Stay in home, shut your doors and pass through it!”

Please allow me the luxury of explaining. When China is on vacation, you have 1.8 BILLION PEOPLE deciding it’s a great time to go see… China.

In other words, trains, roads and planes are booked, blocked or insanely expensive. Two of my roommates decided to try their luck none the less. One went to Hong Kong, one went to Shanghai. I have some friends also that went to Huangshan. I even got some videos from people that went to the Great Wall… “It’s mental I tell ya!” Think of all the tourist attractions that people usually go to and you tell yourself “man, there are so many people…” because you have to wait for 30 min to get in. Now multiply by 10…

**Dramatisation of potential reaction in such situation***

You will basically arrive at the tourist spot and loose your sh*t when you see the amount of people. Out of your control, a natural “WTF?!” will come out of your mouth before you start having foam and loose consciousness because you just spent 2000$ worth of airplanes tickets to come visit China in the worst possible moment… So heed my warning travelers! When China’s on vacation, stay away!

Moving on from the very detailed expected reaction, one of my roommates and I stayed in Beijing.

Me because I never planed on leaving in the first place and her… because of lack of planning. “Buy you train tickets in advanced!” Young people never listen… Then again, old people never listen either. I really wonder if there’s a time in your life when you actually listen? Food for thought. We decided to explore a bit Beijing on my scooter. I rode the scooter with music and sunshine with the occasional stop wherever it smelled like good food. Yes people, we did a sort of “Food Crawl”. Like a pub crawl, but for pigs on wheels where we just spent our time eating, riding a little bit, eating some more and walking to digest until we got to our next destination. What a wonderful day it was. 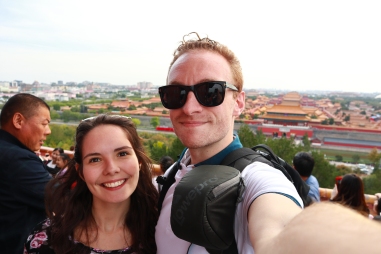 It was very helpful given the fact that Oct 1st was a difficult day for me and I need to change my mind and see the world a bit. Some days will stick with you forever I guess.

On October 4th, it’s the Full Moon Festival. What is it? Well, you eat moon cakes and find the best spot to get a picture of the full moon. We went to the best place in Beijing for it. The Marco Polo Bridge. We got there early (less people) and when the moon was out, we did every single moon picture we could, imitating as much as possible the rest of the Chinese tourists. I will be frantic here, it was pretty and romantic. Great spot for lovers, dates and couples. So I will remember it if I ever will use in such a situation… Still a nice spot for a 20 year old and a 31 year old roommates friends. “Uhu… roommate friends he says.” you would say.

The bridge was lit, the moon was floating over the river, the city gate was also lit and every now and then, you have a Chinese lantern flying through the sky, filled with wishes and dreams. We went on strolling randomly towards where we thought the big celebration was happening, a park nearby. As we moved away from the bridge and towards this… park, it became darker, with lesser light. Until you had but the moonlight to show us the way. The night was already pretty random. So we went on through the randomness. We crossed a broken fence with barbwire nearby. Kept on walking in the darkness, following the sound of people laughing towards a second bridge. And then, the laughter stopped when they saw us and we saw them. Shock, amazement and “wtf?!” were over all our faces. Under the second bridge (the real big one), we discovered a “junior military camp” with baby thanks and young people in uniform. No one said nothing. And I just walked. My roommate followed. I smiled, they calmed down and smiled back. Everyone understood one thing. We are but two random foreigners that got lost in this “closed off” park. We ended up after a long walk (it’s a big park) finding something like an exit, but closed. And again, a guard was staring. My roommate was telling me “why are you heading towards him!?”. And in my most casual manner, I just told her “Well, to ask him to let us out. Why else?” After a quick exchange with the guard, he also understood that in front of him was standing a moron, yet handsome, foreigner and a friend that took a weird turn. So he let us out. Everything was very smooth and weird. Perfect for a full moon night! Next full moon, go on you own weird full moon stroll. See where it takes you. And don’t forget, you can’t be blamed for being the handsome village idiot. Just smile and keep on walking. 😉

If you like the blog, support it to keep it going.